You know how Olympians are really motivated......?

That's nice for them.  It really is.  Because without their maniacal motivation I would probably have had a more productive week myself.  Instead though,  I've been planting myself on the couch every night starting at eight and not leaving until after midnight and I've even watched rowing and equestrian trials during the day.  Say what?

I just have this inner voice that tells me I should be watching.  I'm a sucker for the Olympics--always have been and it's frankly really refreshing to hear people talk about the Olympics instead of politics for a couple of weeks.  I do enjoy politics--it's so important and I think it's crucial that we all know why we're voting for who we're voting for--but it's nice to get a breath of fresh air for a bit too and watch people coming together instead of being ripped apart.  So thank-you Olympic committee for planning the Olympics every four years--the same every four years that we elect a president--it's like a shot of pure oxygen.

So as a result, I have nothing poignant, soul-searching, emotional, Pulitzer prize winning, or even gross to share with you........just the randomness that was this week in between watching the Russian gymnasts not smile.....ever......but they do win the award for best eye makeup......Michael Phelps slap his back and did you notice he has different colored headphones when he comes out before every race?............the incredible nail art that adorns the fingers of every female swimmer............and the track and field heats that don't even seem humanly possible. 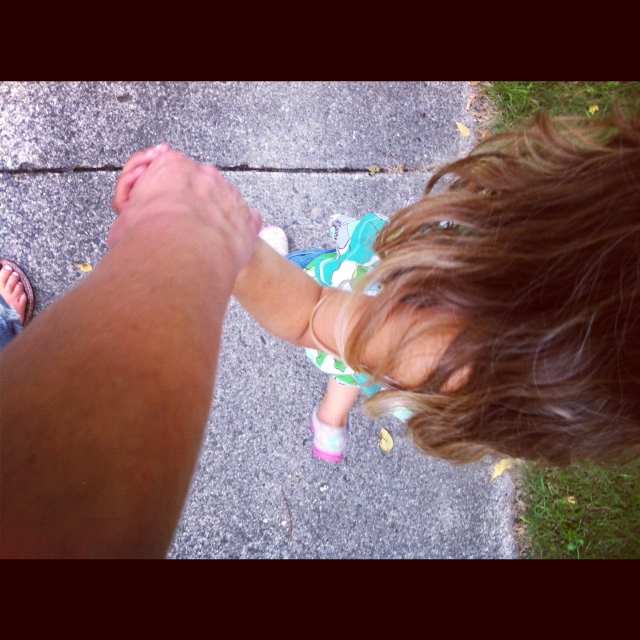 A walk with G to the creepy park near our house. And I'm not being paranoid.  It's straight up creepy.  She begs to go a couple times a week.  Usually I can put her off and get her interested in something else--this time I relented. 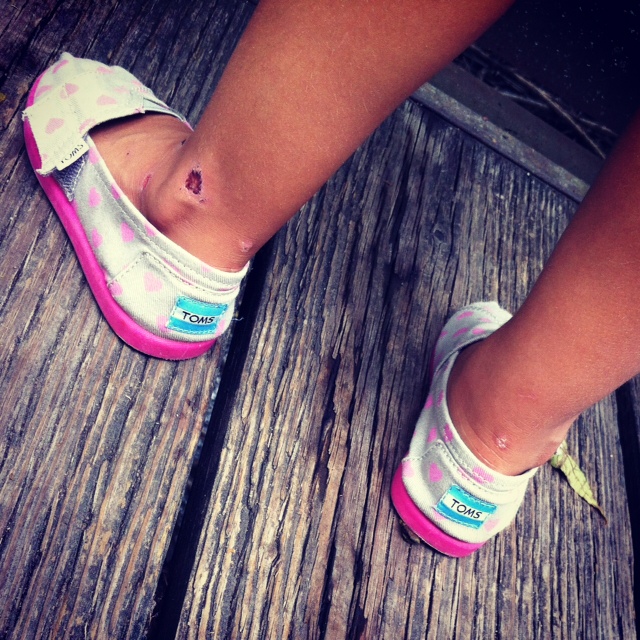 I love these little ankles and their scabs that just scream summer.  She's covered in bruises and remnants of all-out crazy play from fun summer days and nights.......and that's the mark of a good summer I think. 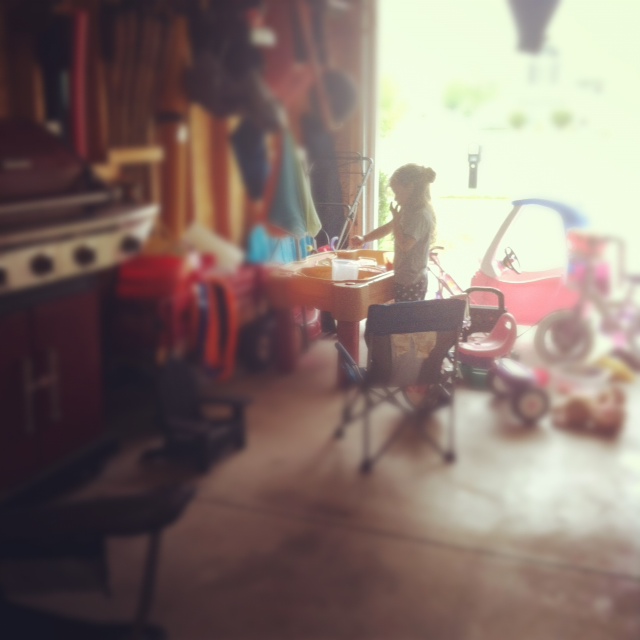 It rained one day this week, (and I don't even remember which day I've been in such an Olympic haze), and G played in the garage for a good hour with all her toys.  It was so peaceful out there with the rain just inches from us coming down in sheets.

She's getting better and better at playing by herself.  I come up on her having conversations, that are seemingly very important, with imaginary friends, and I stay back and listen where she can't see me.  Those little moments are a look into her soul that are hard to come by otherwise.  She talks about what she's afraid of, what makes her happy, how she has a hard time following the 'no-yelling' rule but she tries, and how much she loves macaroni and cheese.  I'll never forget those words that she thinks she's having in private.......they are seared into my mama heart. 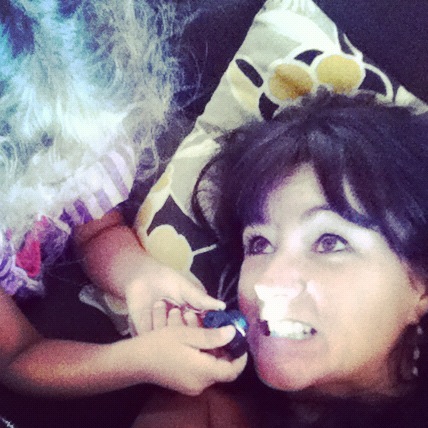 I beg for games that mean G is playing with my hair, putting on my makeup, giving me a check-up or in this case taking an X-ray of my teeth.  Something about being picked at has always appealed to me.  I guess I should have been a chimp. 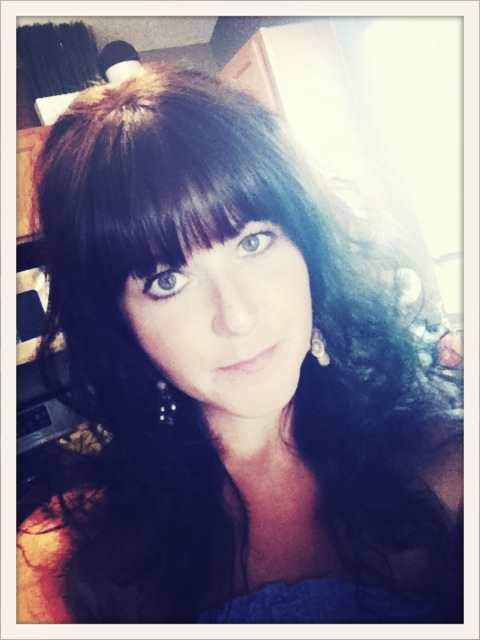 I spent four hours one night this week getting six years of black hair dye stripped out of my head.  And now......it's just really dark brown.  I promise.   I know it all looks like a big ruse, but it's not.  Chris just looked at me in confusion when I got back home at 10:00 Wednesday night--but it's okay--I know it's different, and that's what matters......I suppose.  And now hopefully, Georgia will stop describing my hair color as blueberry.  That always conjured up images of old women with blue hair and polyester Alfred Dunner pants. 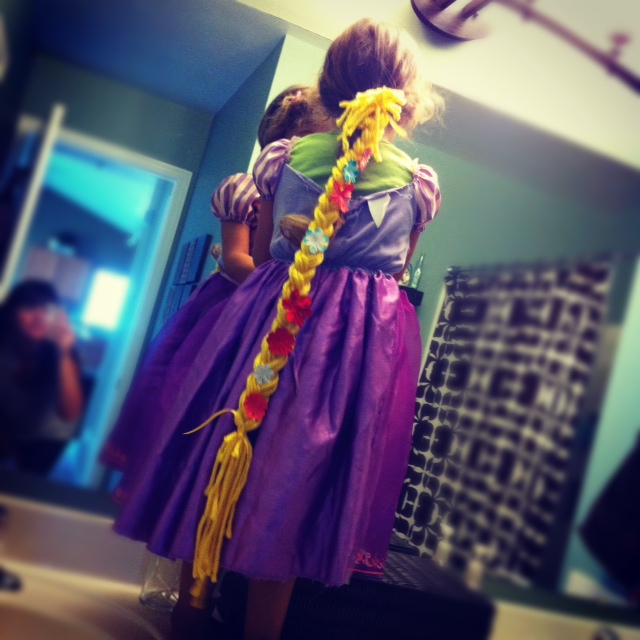 Georgia has recently fallen in love with Tangled and wanted Rapunzel hair.  I whipped this weave up out of yarn and added some left over fake flowers from her second birthday party.  It pretty much hasn't left her head since Wednesday.

Case in point.   She's mowing the lawn in it below with Chris. 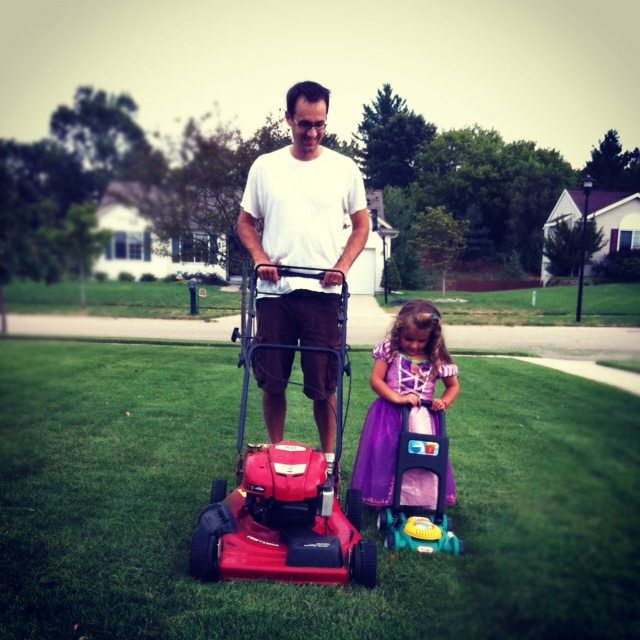 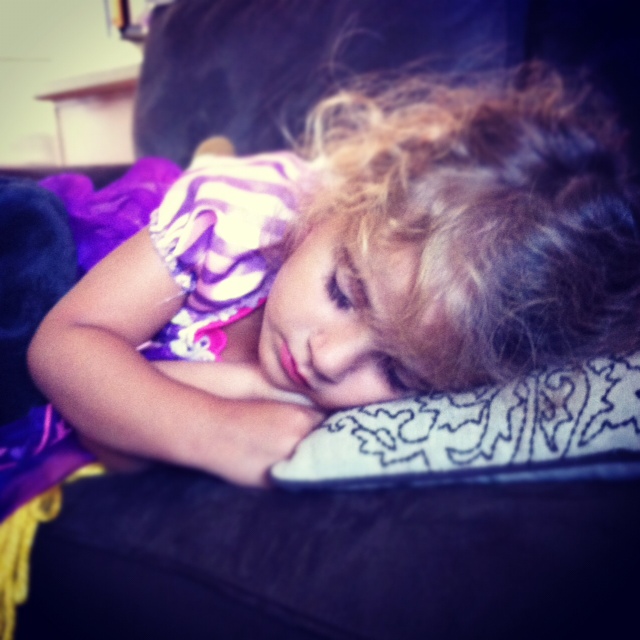 Hope you're having a great weekend.  I gotta get back to these Olympics.
Posted by maggie at 10:16 PM