Putting these little temptation collages together keeps me from shopping online……sort of.  However, since I own half of this stuff--maybe it's not actually helping me at all.  But……a lot of it's really necessary, super-helpful, just plain fun stuff. 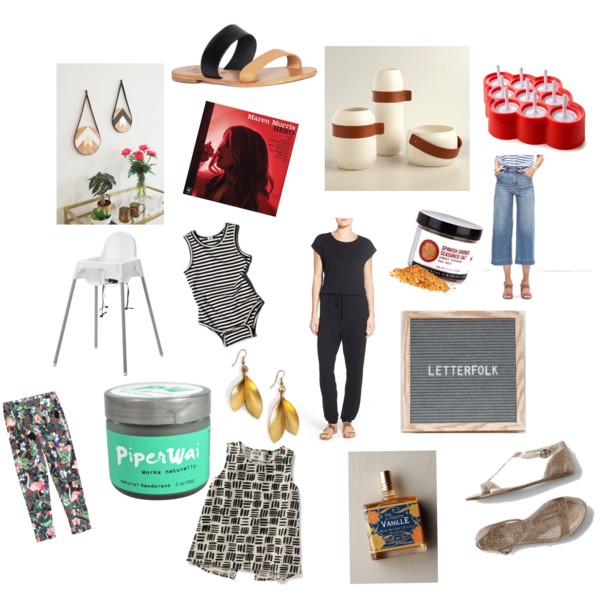 These reclaimed wood wall hangings are so simple and beautiful.  I love the leather strap too!// Sandals like this are a splurge but I have a feeling they'd become an everyday item if I had them.//  I don't think saying we listen to this 100 times a day is an exaggeration.  Georgia and I know it by heart now and we've completed some pretty awesome car concerts to it.// A great find at World Market and so cheap compared to others I've seen like it at more expensive shops.// I think I make batch of popsicles in this little mold a few times a week.  I use smoothies, fruit juice, and even ice-cream.  They are the cutest little size and perfect if you have a tiny kiddo (or a big kiddo) in your house. // Suuuuper tempted by this style this summer and I love Madewell jeans……so we'll see. // It's finally grilling season and I found this amazing seasoning salt at my grocery store and might just be using it on everything this summer. // I've tried on lots of jump-suits this year and this one is by far my favorite in terms of feel, fit, and price--size down if you try it……it runs big!// Roman and Leo is one of my favorite little boy clothes web-sites and I love Crosby in tank tops…..so striped tank tops win every time. // I didn't have a high chair for Georgia….probably because this one wasn't invented yet.  But if you're in the market for a high-chair and like modern design this is it!  Seriously the best ever….and it's $20.// These pants for Georgia are super great---not fitted pants (which she thinks the devil created) but not leggings either. // I'm not a girl who seeks out natural products but when I stumbled upon this one I was intrigued and now I'm hooked. Smells amazing, works just as well as regular deodorant, and doesn't have any carcinogens in it.//  Noonday is one of my favorites and I feel like these earrings will be in heavy rotation this summer. // This is a girls tank top from Old Navy--but if you buy a girls XL or XXL it's the same as a women's small or medium…..so there you go. // I've been on the hunt for a good vanilla perfume for years and I think this is it. // These little letter boards are kind of everywhere right now and I think they'd make a cute little wedding gift…..or just because gift….for someone (like yourself). // G doesn't love flip flops so these are a good alternative for cheap and easy summer footwear.

A tale of two viral videos. The good & the "this actually blows."

Mother's Day season always brings out the video makers that know how to make us all cry.  And this year is no exception.  There are two videos making the Facebook rounds this week……..and I get why they've both gleaned a lot of attention.  One deservedly so….it's a super tear-jerker….I mean….it really is.  See the first video below.  There's not much to say about it other than it's an incredible capture of how us moms (and yes…..dads too….but let's not miss the point Internet cynics…..it was made for Mother's Day) feel when we watch our kids running across the yard and can imagine that same scene four short years ago and it catches our breath how much has changed and we know it's only going to start happening faster.

And then there's this one….

and I'll just come out with it.  I hate it.  I watched it once and thought--that's cute, funny, gimmicky…..and then I kept thinking about it.  And I starting resenting it and feeling like it's another commentary on how we view children. I've been on a plane with a crying baby--other peoples and my own.  And here's what I don't understand about our culture……..when have children become so intolerable that people who might have to be subjected to a child who is crying on an airplane(where their ears might hurt, they're over-tired, they aren't used to being held on a lap for two hours, and on and on) or wherever, warrant getting a free flight or some other reward?

I know--it's fake, they're actors, it's supposed to be a nice thing, everyone was pumped when the babies cried because they were one step closer to a free flight and the moms didn't feel bad……I understand all the nuances.  But I can't stand the underlying message here.  "Those of you who have to be tortured by hearing a baby cry on an airplane absolutely deserve a free flight---I can't believe you had to be inconvenienced for three minutes until you got your headphones on by hearing a BABY cry.  Does our society really need more fodder for feeling justified that it's okay to walk around about to blow at any minute when someone so much as puts their toe over the line? Does our society really need more reason to think of children as an inconvenience and a nuisance?

I think a better use of time and Facebook likes would have been if every time a baby cried in their fake commercial Jet Blue gave a free ticket to the saint on the plane who stepped forward to offer genuine help to the mom who was trying everything in her power to get her baby to stop crying.  "I've been there.  It's okay.  Your kids are a gift.  Let me give you a ten minute break and I'll walk them up and down the aisle for you."

That deserves a reward, not the random exasperated cranky traveller who believes that everyone is constantly imposing on their life.

Mountain out of a mole hill here?  Maybe.  Maybe not.
I suppose I'm just tired of messages that subliminally send the message that kids are a problem to be solved.

So watch the first video again and again--because that's the real spirit of Mother's Day. 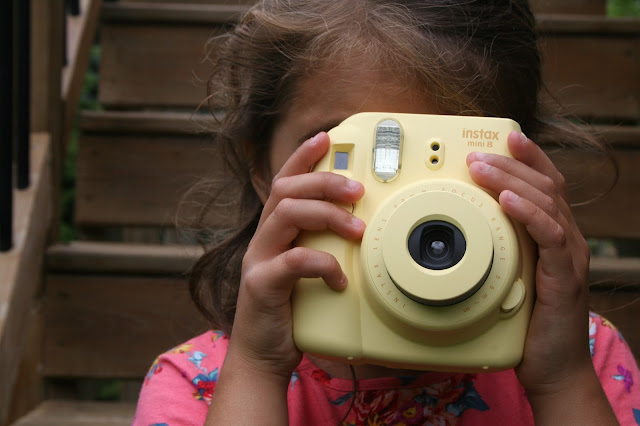 Hello, hi-there little blog.  I didn't forget about you.  Apparently I just needed a good snow-day with the kids to get my creative mo-jo back.  And I just needed to do it.  Post.  Hit publish.  So tonight was the night.

Last summer Georgia and I took some pictures of her Calico Critters having fun outside with the intent to write a story about them.  Well….summer plans started rolling and time got away from us and we kind of forgot about it.  Earlier this winter I found the pictures on my memory card and had them printed.  And today was the day we made this story happen.

I buy blank books for Georgia at the dollar spot at Target whenever they have them.  She can churn out books faster than Danielle Steele so we like to have a good supply on hand.

When we took our pictures last summer we decided that the story would be something like….the chipmunk family needed to move…..for a reason yet to be decided, and they'd make their way from their outside home to an inside home.

A few of our pictures……. 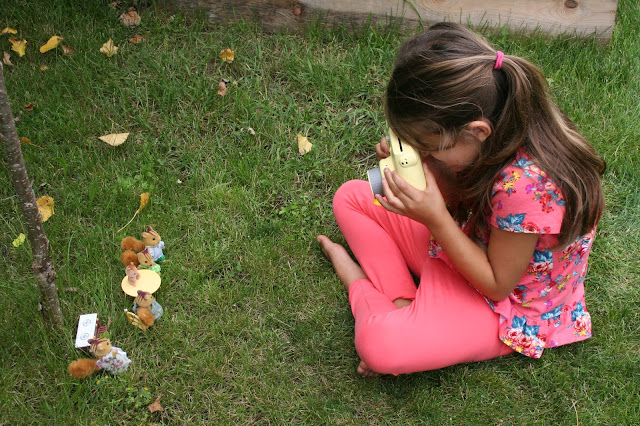 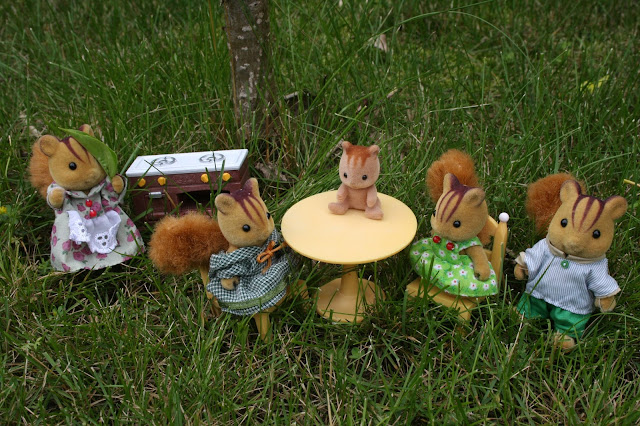 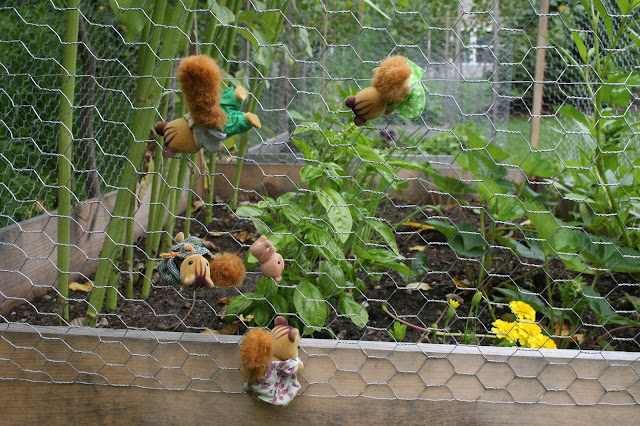 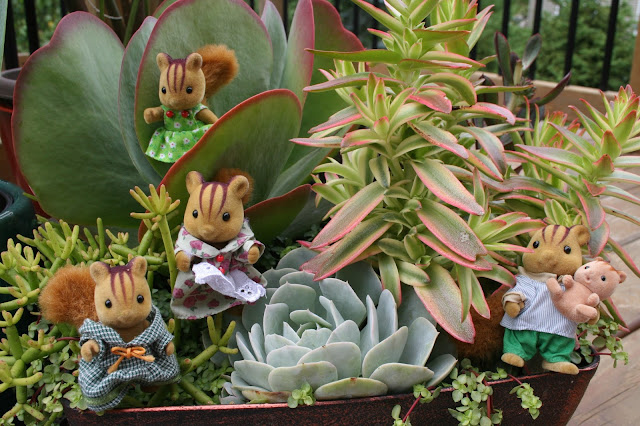 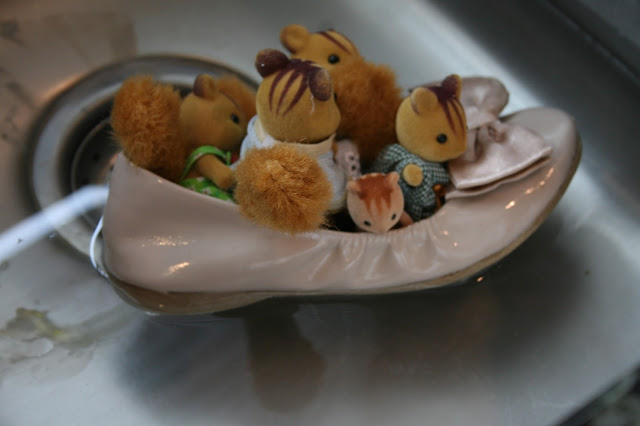 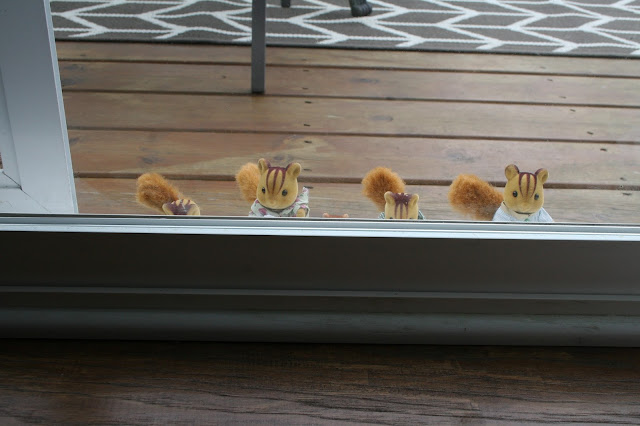 And this afternoon we put everything together…… 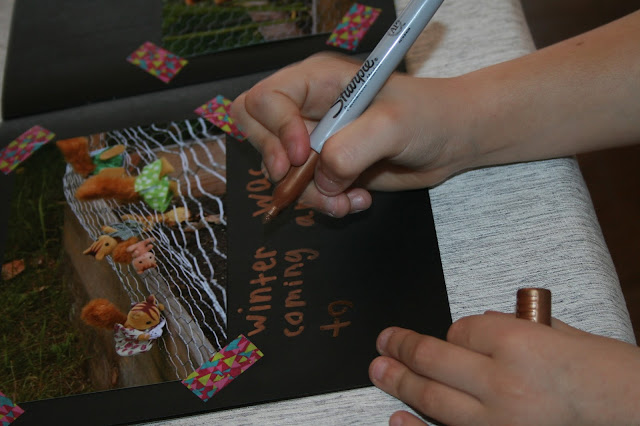 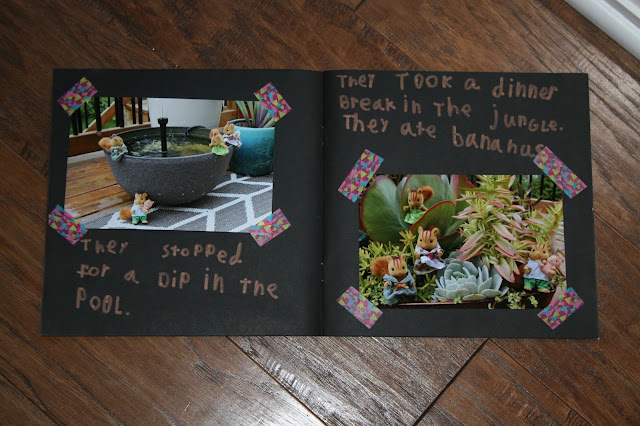 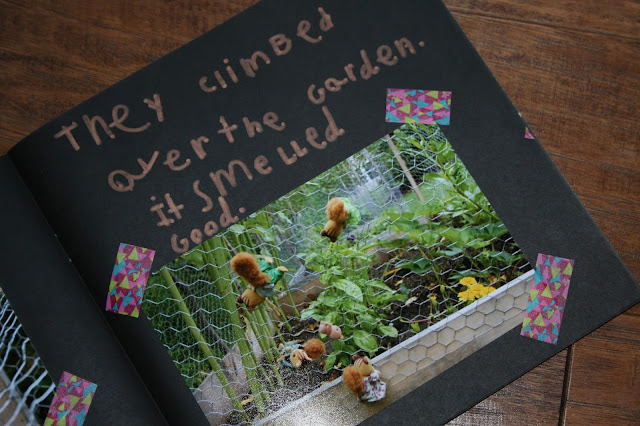 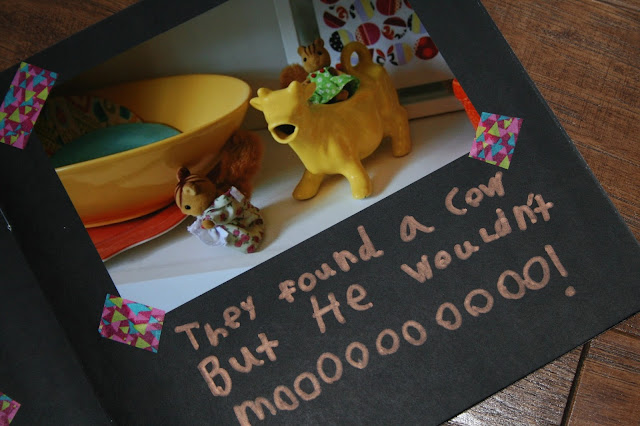 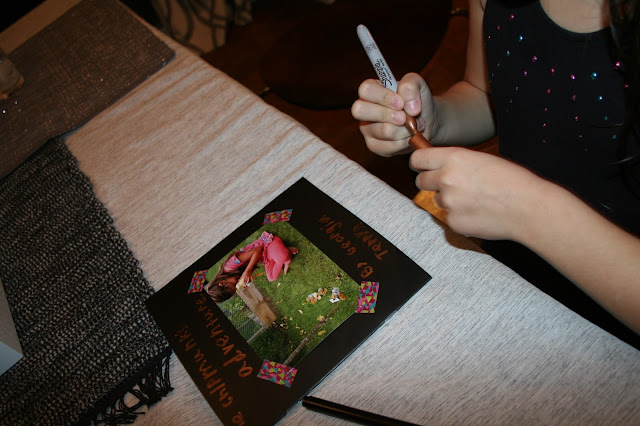 She was pretty proud--as she should be!  She's thinking maybe her teacher will read it during snack time tomorrow.  Super simple project you can do with your kids--with just about anything they collect or love.  So head to the dollar spot at Target and keep your eye out for cheap blank books and show your kids how to self-publish a book! 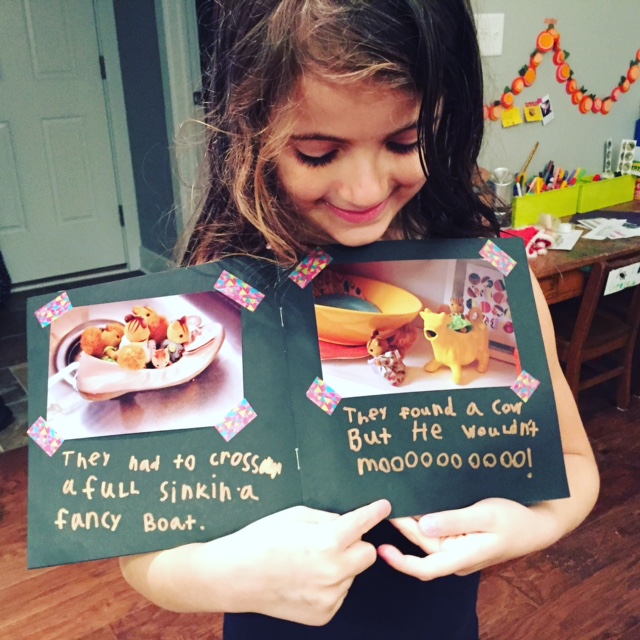 Email ThisBlogThis!Share to TwitterShare to FacebookShare to Pinterest
Labels: all the in between, georgia peach, mom stuff
Newer Posts Older Posts Home
Subscribe to: Posts (Atom)