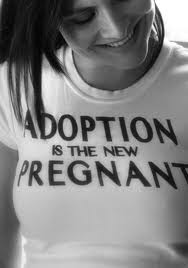 I found this picture on Pinterest a few months ago.  I fell in love with it and I wanted this shirt.  So I started looking for it on line.  No luck.  What I did find though shocked me.

Pages and pages of people condemning this shirt (I guess they were made a number of years ago and sold in trendy boutiques--they're, sadly, no longer available).  People thought they were rude, they trivialized being pregnant, they trivialized adoption; they made doing either a joke.

As an adoptive mother who went through five years of infertility treatments trying to get pregnant, and finally made one of the best choices of my life--adoption, I fail to see the offensive nature of this shirt.........in any way. I think it, finally, gives moms who are going through the adoption process a shirt to advertise their exciting news just like their pregnant friends have been doing for years.  Something fun and light-hearted.  It's not meant to make some big political statement, it's not meant to say that adopting is cooler than being pregnant, and it's not meant to say that adopting is an off the cuff decision--just like shirts that have some funny quip about being pregnant don't intend to say it's the superior way to have a baby over adoption.

Here's the thing--I've seen women who are pregnant wear shirts that say, "Baby Buddha Belly," with an arrow pointing to their belly, "Please don't touch," with the same arrow as mentioned above, "All I wanted was a back rub," "Fertile Myrtle," and "I should have had a headache."

I would argue that if a shirt could trivialize being pregnant, one that says, "I should have had a headache," would be it.  In fact, I think it's unbelievable that any woman would wear that shirt while being pregnant--I'm sure their unborn child would get a real kick out of mom regarding them as a nuisance. (And I'm not making this up--when I googled funny maternity shirts--the online store that sold this popped right up.)

What shirt was rude again?

What shirt trivializes being pregnant again?

If you don't want to wear shirts that advertise the fact that you're pregnant in a "cute or funny way," then don't.  If you don't want to advertise the fact that you're going through the adoption process then don't.  And if you do--do.  I don't condone the "I should have had a headache" variety, I'm okay with the "Fertile Myrtle" category--just be sensitive about it, and I totally love the "Adoption is the New Pregnant"genre.

Let's celebrate adoption the same way we do being pregnant and let's allow adoptive moms to sing out the fact they are having a baby too--just like pregnant moms do, in all different ways.....even a funny t-shirt.

And if you know where I can get this shirt--let me know!  I'm one proud adoptive mom and I am over the moon that it's how I came to be Georgia's mom.
Posted by maggie at 8:02 PM