Last week my sister-in-law posted this on her Facebook timeline.......... 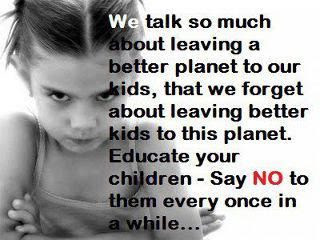 And I love it.
Love, love, love it.
But you know what?
It's a lot harder to actually do this when push comes to shove, when the rubber meets the road, when it's time to put up or shut-up (that's as 'coachy' as I get).

We read a lot of parenting books in this country; ones that teach us about damaging our children's self-esteem, ones that tell us we need to give kids choices so they think things were their ideas, ones that tell us we'll raise aggressive and insecure children if they are yelled at or punished too harshly (whose definition of yelling?  too harsh?) And, of course, I know the difference.......but when it's your kid and you love them like a crazy person you start to think that just about everything might be too harsh.  You want to have good days.  You want to laugh and fool around and walk on a cloud and ride a unicorn.  You don't want to feel guilty and like a cranky mom who is constantly lecturing and saying no and hauling their kid to time-out.

Giving them a time-out?  Let's make sure to put them on a stage in the corner of the living room for "time-out" instead of in their rooms because they might feel shunned??

Offering a choice about everything under the sun?  So, not only will they think it's their idea--they'll believe they get to choose everything and if it's not their choice they'll throw a fit.

And I feel like I can say all of these things because I've struggled with them myself.  I've waffled back and forth on doling out all of the above.  And I waffle because we're on the same team right, Georgia and I?

We're Maggie & G.....we go to Target together, we play vet, we draw with chalk outside, we go for walks in the woods, we make cookies and color together, we eat at Noodles & Co. and share a rice krispie treat--EVERY week, we play at the mall, we read Charlie & Lola books, and put on makeup in the bathroom mirror.......we're on the same team. 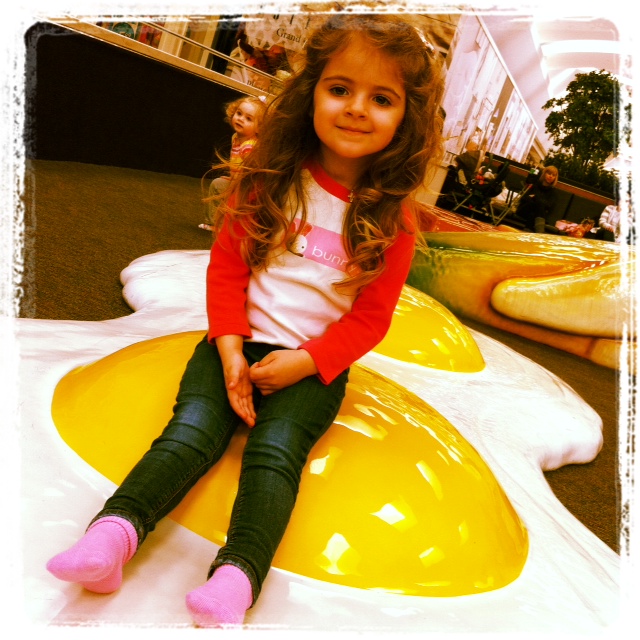 Playing on the breakfast food at the mall--strengthening our immune systems.

My mom says we're not on the same team though. 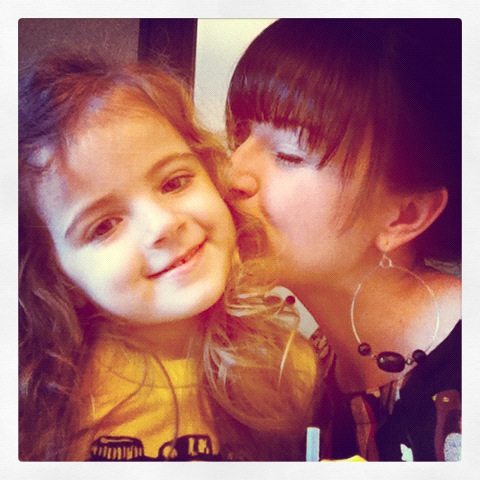 And two weeks ago when Georgia threw the biggest, "I'm going to sound like I'm being murdered" fit because she didn't want to TRY to go to the bathroom, or we had to leave Taco Bell because her taco broke and her tantrum about it could be be described as a psychotic break, or today......moments after this idyllic picture was taken she slammed her cart into my legs in a fit (and I'm lucky my Achilles tendon is still in tact) because she didn't want those flowers in there.............I believed my mom.......that behavior like that didn't really seem like something someone who was on my team would engage in. 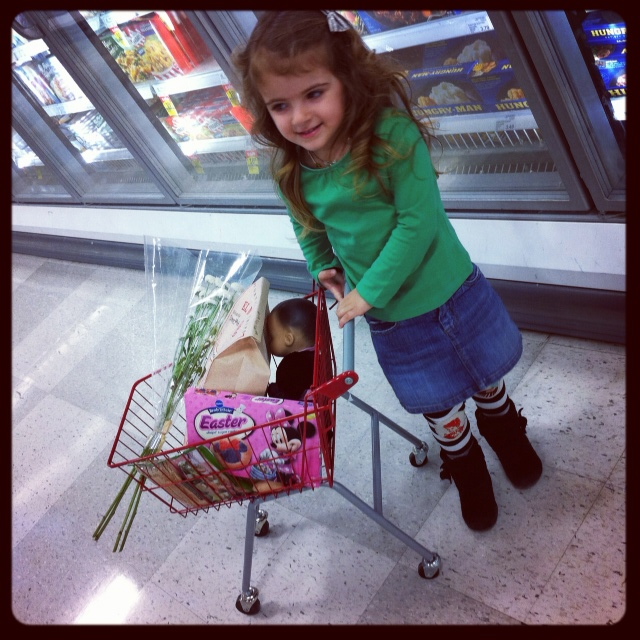 My husband is on my team.  And I know that because he's never laid on the floor of Taco Bell shrieking and kicking that "tacos aren't supposed to break." At least not to date.  And I suppose that's how I know who is on my team and who isn't.  The Taco Bell test we'll call it.

And it's really hard to type the words..........."Georgia and I aren't on the same team."  It feels mean.  It feels cranky.  It feels cold and prickly.  But I know it has to be true.  We might be team-ish, but we can't truly be on the same team.  I'm on the mom team; the parent team.  She's on the three year old team.  I'm on the team that has to raise this person......that will turn into an adult.  My pastor always says in regards to his own child-rearing, "I refused to unleash on the world another selfish, arrogant, lazy, undisciplined, unmotivated, and dishonest person."  I love that.

I love it because it reminds me regularly that I'm not just raising a toddler who is pretty cute most of the time.......I'm raising an adult who has to become something productive, who has to know how to treat people appropriately, and who needs to learn that screaming on the floor of a MRSA infested fast food establishment is never okay and there will be consequences for that--ones that are really not very fun.

And it goes back to that little saying from my sister-in-law.......we need to leave this planet with some better kids.  Kids that don't necessarily grow up thinking that mom and I are on the same team and she's got my back no matter what.....even though we do have our kid's back.....you see that fine line, right?

I have to keep reminding myself as the parenting is getting tougher.......we may be on different teams.....but we're in the same league. 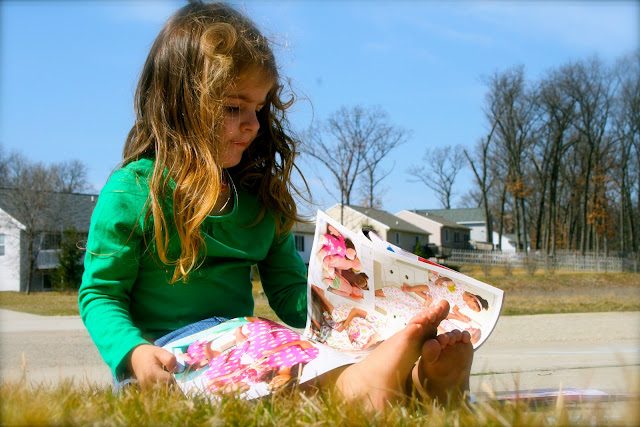 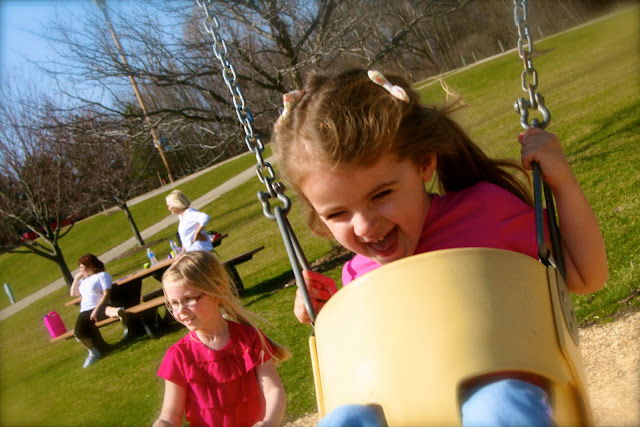 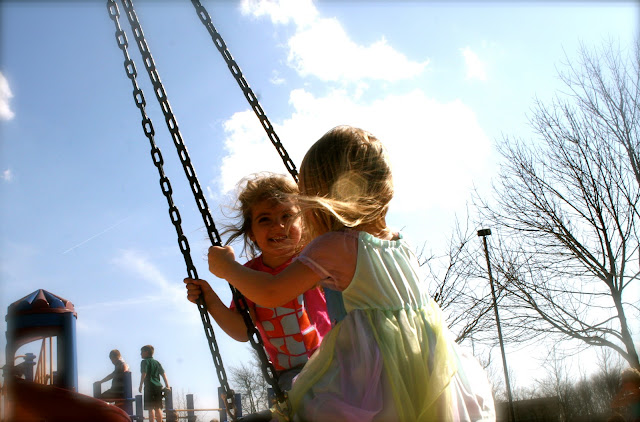 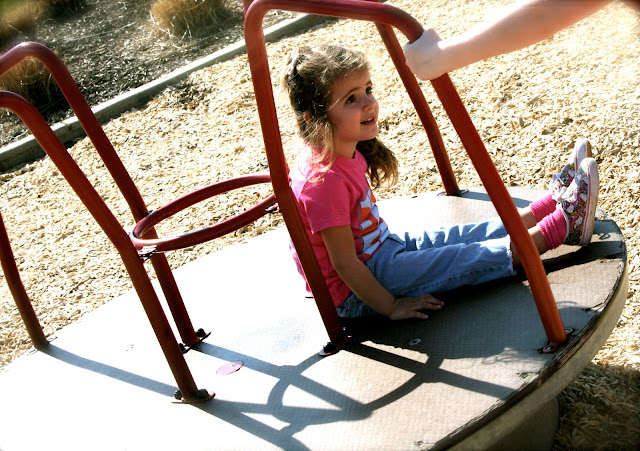 Solid proof we're not on the same team......this girl can ride a merry-go-round at top speed.  Get me an air sickness bag.


So I need to work hard for this girl.  The love you feel for your kids is unfathomable--no one can prepare you for it.  And I desire so much for her--for her to kind and loyal, compassionate, determined, full of strong character, productive, motivated, and every other character quality you could name when you make your list of "who you want your children to be."  It's a lot of really hard work, and hard days, and hard nights, and hard public outings, but look at her............. 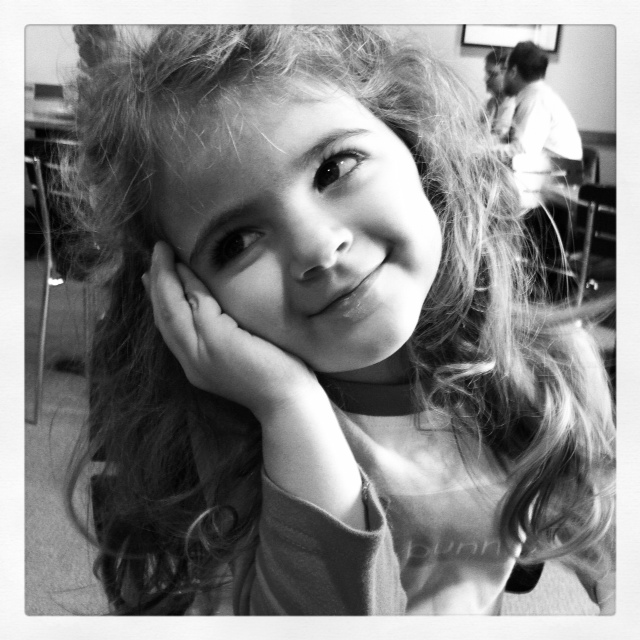 it couldn't be more worth it.
Posted by maggie at 9:00 PM