So............I get a lot of questions about blogging and the random stuff I tell everyone on Pink Shoes.  In particular, I get a lot of questions about adoption.  They're great questions and ones that I haven't necessarily addressed in any particular post so I thought I'd fill you in and give you some answers.  Keep in mind that my answers to these questions reflect one adoption experience; mine.  No two are exactly alike and since everyone enters the adoptive experience in a different frame of mind with varying emotions, paths that led them there, and life situations, my answers to these questions could be a one eighty from a friend of mine who was asked the same ones.

1.  How long did the adoption process take you?

I hesitate to answer this question because my answer is an anomaly amongst adoptions and I two hundred percent know that.  If we were to decide to adopt again I in no way would expect it to go as fast as it did with Georgia.


We called an agency to inquire about the process in mid-September of 2008, filled out paper-work, took our adoption classes, and finished our home study by the end of the year.  I turned our scrap-book in at the end of January 2009, but only because our social worker begged me to since they had a couple that they thought would be a good match for us, and we met our birth parents February 11th.  Georgia was born mid-March.  Crazy.  Whirlwind.  Totally unexpected.  Totally awesome.


Her adoption, however, was not finalized until the following December. More on that later. 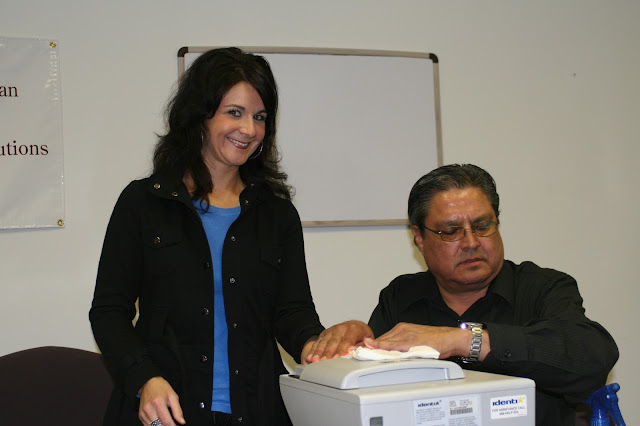 Getting my fingerprints done.  Yikes--I look strange.  I was kind of scared of this guy.  This office was C to the REEPY. 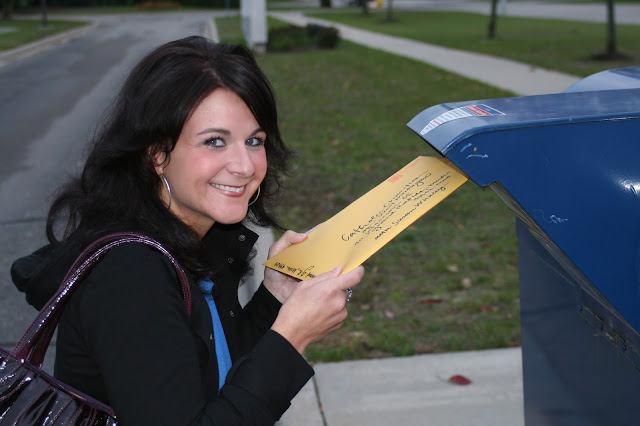 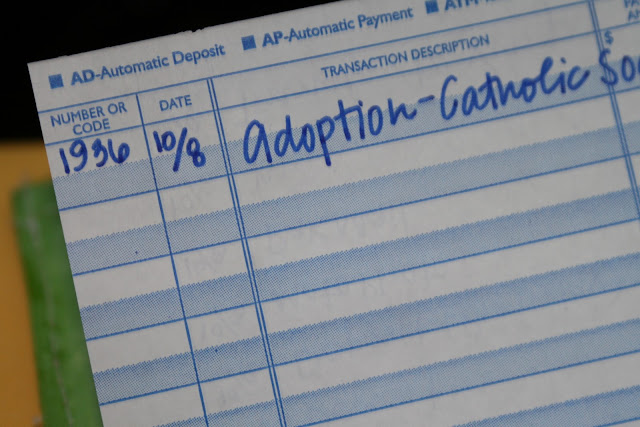 First check written for the adoption.

2.  How open did you intend your adoption to be when you started the process?

Uh, as open as a door with ten deadbolts on it.  I was completely opposed to open adoption and thought it was incredibly dangerous and risky.  I thought parents who engaged in open adoption were negligent and must have a serious lapse in parental judgement.  I have never had the wind knocked out of me so hard in regards to an opinion I was so wrong on.


There was a moment soon after we'd met our birth parents, when we were at one of their houses for dessert one night when I just knew, in an instant, we'd never have a closed adoption.  It instantly became a terrible thought to me to never see these people again and not allow them to play a part in our daughter's life.


That became what seemed negligent to me and I knew I could never have anything but an open adoption....especially with them.


3.  How often does Georgia see her birth mom and family?

That's a hard question to answer because there is no magic number.  We don't have a formal agreement.  We see each other whenever.  We live close.  We go to each others houses, get together for Christmas, meet for lunch; it's really loose.  We'll exchange texts about random stuff just because we want to and I love to see them.  Absolutely love it.  It almost feels like I'm hanging out with family when I'm with them; we kind of are.  We've seen each other about three or four times in the last four months.


4.  Do you ever worry about the ramifications of an open adoption when it comes to your daughter and her feelings about who she is?

Not really.  Sure, there are these brief flutters of hesitation.  But those are mostly fed by antiquated notions of adoption that I grew up on--that we all grew up on.  Not a lot of research had been done ten, fifteen years ago on the benefits of open adoption.  It's a relatively new "thing" with domestic adoptions and is proving to be extremely healthy and helpful for both the adoptee, the birth parents, and adoptive parents.  I'm reading a book right now about creating a life-story for your adopted child that details where they came from; the good and the bad.  It stresses how much adopted children need to know their histories.  It's crucial to know where you've come from no matter who you are or what the story is.  Georgia will always know.  We've eliminated the mystery.  She never will have to make anything up or glamorize what she doesn't know.  I don't believe that keeping the truth from her on the matter of her adoption will shield her from pain and questioning.  I do believe that it is my responsibility as her parent to help her form a complete story of who she is.

It is so all over the board.  I've heard of people paying upwards of $30k for a domestic adoption through a large agency or about half that (like us) through much smaller agencies.  It's not cheap though compared to birthing your child no matter where you do it.  However, there is a federal adoption credit that you can claim on your income taxes and it's a huge help come April 15th.

Again, this answer varies.  Our bills included line items like adoption education classes, home study reports, birth parent counseling, court fees, placement interviews, fingerprinting, and a variety of other miscellaneous fees that I can't exactly remember right now.  One of the reasons we chose the agency that we did was because they could show us exactly how much all of the "work" of an adoption cost them in regards to filing documents with the court, counseling birth parents, time spent on a home study, and conducting adoption classes and there was little to no inflation of those items that they were making money from.


7.  If Georgia's adoption wasn't finalized until she was nine months old did that mean her birth-parents could change their minds up until then.

No.  Not at all--not in Michigan.  Every state has varying laws on adoption and the period within which birth parents can change their minds but none of them operate anymore like the Lifetime movies we've all seen that scare the crap out of us in regards to domestic adoption.  For us, once Georgia's birth parents signed off their parental rights (which happened quickly since they were both present and part of the adoption plan; this isn't always the case) they had about thirty days to contest their decision.  However, contesting a decision like that isn't necessarily as simple as making a call and saying, "I just changed my mind."  According to our social worker they would have needed to prove that they had been coerced into the adoption plan, they had been blackmailed, or some other sort of suspicious behavior.


From there, there was an additional ninety day period where there were more visits from a social worker as she compiled her final report to send to the state to petition for permanent adoption and to request a court date for an adoption finalization hearing.  Our social worker sent all of that paper-work in late September.  It takes a while to get a court date because family court is really busy and you get a court date when they have an opening.  It really has nothing to do with your situation or birth parents or something not going right.  It took two months from the time that our social worker filed our paperwork to get a court date and we only had three weeks notice once she did.


But here's the thing...the hearing in court is more of a ceremony and a celebration.  Your adoption is in the clear once your social worker sends in a court request...and really much before that.  While it's an awesome thing to hear a judge bang a gavel and legally change your daughter's last name to Terryn........there was no reason to fear Georgia being removed from our home much past that thirty day period right after she was born.  And even then......I never really thought about it.  We were very lucky when it came to the extremely open line of communication we had with our birth parents from day one.  They told us over and over what a good decision the adoption was. 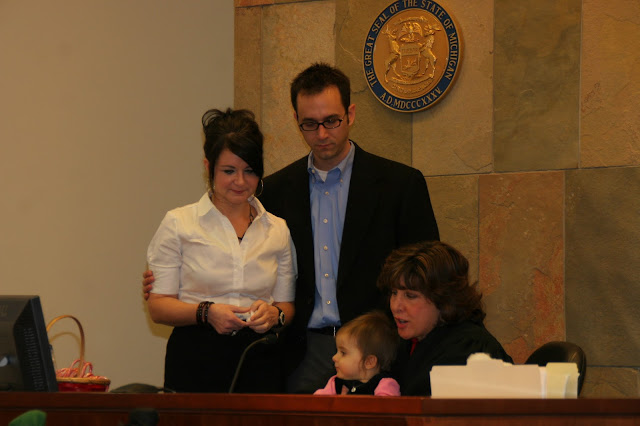 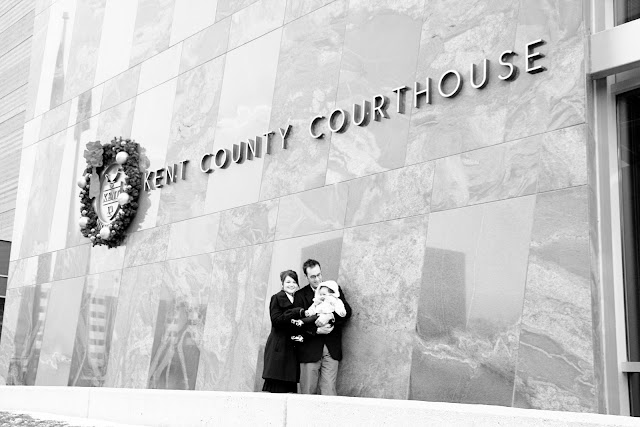 Outside the courthouse on Georgia's adoption day.

The most popular question. I have no idea.  I struggle with this decision daily and I just don't know.   I have no clear direction in my mind.  I wouldn't want Georgia and a sibling to be any closer in age than 3-4 years apart so I still have a little time to deliberate.  If we decide to add another child to our family, it will be through adoption and we would hope that the situation would be one where we could have another open relationship with birth parents.


That's it for now.  If I missed something you're dying to know about the process or anything else for that matter, let me know, and I'll do another FAQ sometime soon!
Posted by maggie at 9:47 PM