You know before you're a mom you say things like,


"I'll never have the kids with boogers coming out of their nose,"
"I will never let my child scream in the middle of a restaurant....and for sure not a library next to an old lady who is giving me a dirty look because I won't leave until I've found the book I'm looking for.....,"
"I think cry-it-out sounds inhumane," (I never thought this....FYI)
"I would never let my kid have cotton candy for breakfast," (I wish I would have thought this)
"My child will only watch one hour of television a week,"

Georgia regularly has boogers in her nose.  I know--it's gross......but I can't fight the snot battle every time I want to.  I just can't.

I was that mom that doled out empty threats in the library yesterday while looking for a book I wanted.  We'd spent forty five minutes playing with the Dora dollhouse, finding more Charlie and Lola books, and rolling around the Berber carpeting in the kids section; I was getting MY BOOK.  "If you shriek again you're going to get a spanking, you won't get any jelly-beans, you can't get a drink of water from the drinking fountain, and the terrifying 'that's enough--I mean it,"-- All things I said, all things I had no intention of doing.  We slurped that water from the dirty drinking fountain on the way out, ate jelly beans in the car, and kissed each others cheeks when we got home--no spankings.

Our neighbors gave Georgia some cotton candy a few weeks ago.  She loved it.  She had huge puffs of it at breakfast three mornings in a row.  Whatever.  Some kids eat Pop Tarts for breakfast.  What's the difference?  I submit to you---nothing.

Cry-it-out.......that's a conversation for another time.  Don't feel like defending myself today.

Yeah.  We said a lot of nice things and grand ideas before we became moms right?

But here's the thing right now that I'm thinking I'm going to have to let go of and I'm just not ready.

Sorry if you were expecting something really deep there.  This isn't a deep post.

I take some pride in stuff like Halloween costumes.  The creative side of me just can't let go.  When Georgia was six months old she was Curious Georgia.  My mom's neighbor girl actually came up with that.  I loved it.  I ran with it. 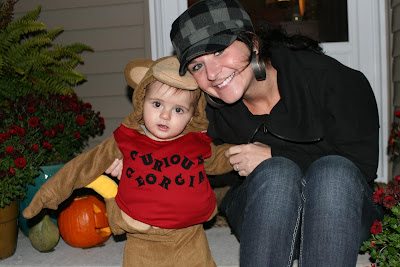 Last year she was a zebra.  She loved zebra's at the time.  Loved that.  She called them 'ebras."  She was so cute and cuddly in her little costume. 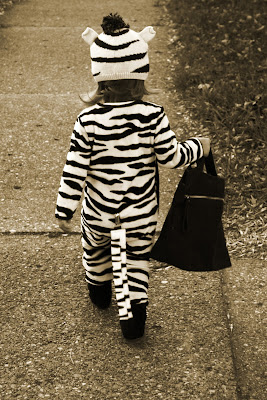 This year.....Georgia loves Madeline.  She's been listening to a Madeline book on tape every time she goes to bed for about 8 months now.  She has the whole beginning of every Madeline story memorized, "In an old house in Paris that was covered in vines lived twelve little girls in two straight lines."  It's so great when she says it.  So of course when I found this picture on line...................... 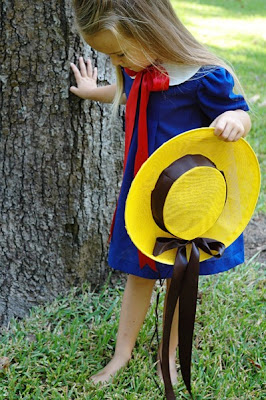 I knew this is what she had to be for Halloween.  How could she not love this idea.  I could make this.  So easy.  I told Georgia about three weeks ago when she started asking about costumes she'd see in stores that she was going to be Madeline.  I was expecting her usual, "That's a good idea!" 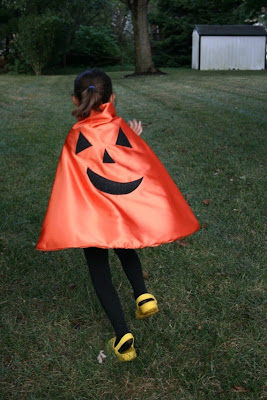 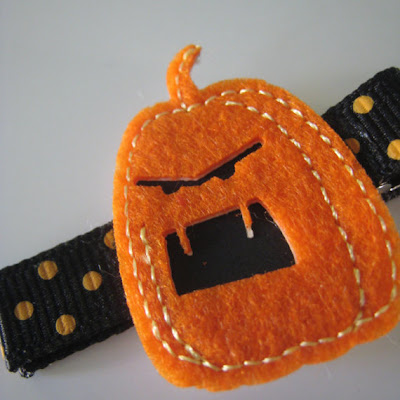 I guess I could add a streak of blood to the costume to make it scary; rub dirt all over it, tear it up, have smoke coming from it......I don't know.  This clip she could probably wear--it's a scary pumpkin.

But seriously?  Do I have to give on this.  Push my creative mom pride to the back and invest in a big scary pumpkin.  We're going trick or treating at this amazing historical village this year that we had to purchase tickets to.  We'll be posing for pictures next to Noah Webster's home, Henry Ford's assembly lines, plantation houses, and 18th century shops.  Everyone will look cute in their creatively constructed costumes, the village will be decorated in turn of the century Halloween decorations, and it will be this former history teachers dream Halloween.  And I'll be traipsing around with my big scary pumpkin.

And what do you bet the minute I go to get her dressed in this monstrosity of a Halloween costume she'll say, "But I want to be Madeline."
Posted by maggie at 10:13 PM