I will never cook a big meal for my whole family on Mother's Day.  Never.  I won't do it.  I won't even do the whole, "Well....Chris can grill and I'll just quick whip up a salad, and bread, and a dessert," thing.  Because we all know that quick whipping up a salad and bread and a dessert thing ain't quick--especially when it involves six or more people.  And maybe to most of you--not cooking on Mother's Day seems like an obvious choice.  But growing up--we never went out on Mother's Day.  My mom or grandma always cooked.  Always.  We had gorgeous meals.  They were amazing.  And maybe the steaks were grilled, maybe even a skewer of mushrooms was grilled--but the rest?  All mom.

About three years ago when I volunteered to host Mother's Day I declared it would be our first year that we'd be going out and I promptly made reservations at one of my favorite restaurants.  After all, I was one of the moms now.  The day is supposed to be all about us taking it easy (ish), so I was doing it.

And I have a handful of other "I will nevers."  Some stem from my own childhood and some stem from my husbands upbringing.  We've all got them--to pretend we don't is just plain lying.  Even our own parents have them.  My mom hated when her mother made liver and onions and meatloaf for dinner.  She'd never make it for us even though we loved both those dishes and we're eternally grateful for that "never."  She was a morning person, my grandma wasn't.  I'm more of a hybrid and have no problem when eleven a.m. on a Saturday here and there rolls around and I'm still in my pajamas; Georgia (and my mom) can't stand it.  She wants to be dressed five minutes after she's awake at 7:00 a.m.  I'm sure one of her "nevers" will be 'lazy Saturday mornings.'  Oh….and here's an ironic one…..I swore to my parents that I'd NEVER make my children stay at the table until they'd finished all their salad because they tortured me with that nightly….setting the timer, watching me gag, threatening me with an early bed time, and all kinds of horrors (that I now use myself for other offenses).  But guess what…..Georgia begs for more salad…..every night.  My mom laughs a big evil Halloween laugh at that one whenever she's witness to it.

And on-and-on the nevers go.  In general…..I think it's okay.  We all have to find our own rhythm, carve out our own habits and priorities, figure out what makes us tick and how we work best. However, the "I will nevers" have a habit of turning into demands instead of desires a lot of the time.  And that's where things get dicey.

Most of the time….when desires, the way we like it best, and how we think something should be done become demands they start to impact us in a negative way.  And those around us too.  These desires aren't wrong, but when they turn into, "If it doesn't go the way I want, someone's going to pay because of it," that's a problem.

They can ruin relationships because they become a hinge on which your tolerance, grace, reality, patience, compassion, and perspective for others and their circumstances lie.  One tiny tiff about one of your "nevers"being compromised isn't such a big deal….but when it happens over and over……people might start distancing themselves from you, asking you to be involved in less and less, and see you as hard to please. Layer after layer of that becomes too hard to peel back in a reasonable amount of time….and soon…your relationships just aren't what they were.  And all because one of your "nevers" stopped being a desire and became a demand.  Often an unreasonable one because we tend to blow our desires up to gigantic proportions and they become distorted into platforms that we treat like ethical and moral lines in the sand.

Just something I like to think about now and then when I start to think that maybe my "nevers" are getting too prominent.  What are my nevers?  Are they worth it?  Could they flex a little?

Are they becoming demands?

How about you?  What are your "nevers"? 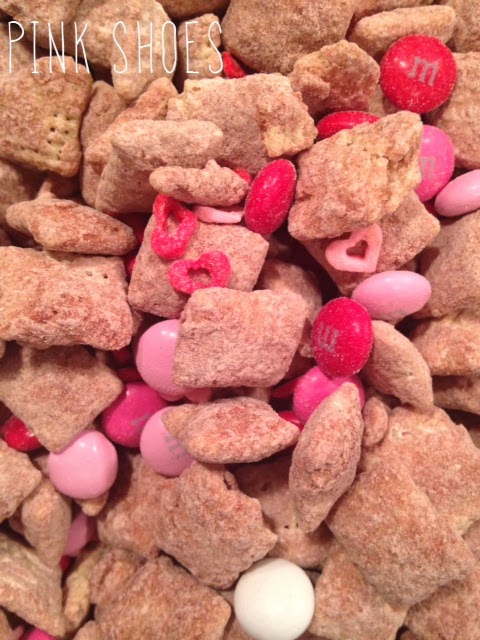 I've never really liked it but I was tempted by this cute red velvet cake mix Valentine's puppy chow on Pinterest.  So I made it.  And dealt with the powdered sugar mess that all puppy chow produces.  And the puppy chow was as mediocre as they all are. So there you have it…..I'll never make puppy chow again.  At least that's my desire….if it's Georgia's all time favorite snack….I'm sure I can be persuaded.