From a teacher's mouth. {Thoughts on why I'm glad my mom took over my 4th grade bug collection.}

"Helllllo Clarice."
Sorry, I had to.  Bug collections always give me Anthony Hopkins and Jodie Foster shivers.  Not at all the point of this post.

But here's what is (and it's kind of a soapbox).
In fourth grade I had to make a bug collection.  Everyone knew that fourth grade was the bug collection year so all summer long whenever we'd come across a praying mantis or a cicada shell, or a shriveled up bee, or whatever, we saved it.  And then, come September or October we'd haul them out of our freezers and impale them with pins and oh-so-nicely display them.  And maybe this is what I could have done on my own.  It's reasonable.  It's neat. It's fine. 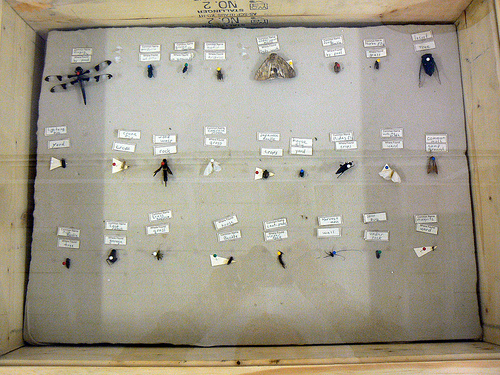 My mom and dad however, would never have that.  They were more interested in completed projects of the variety displayed below.  And this was the expectation for every project.  Rarely did we complete a school project of this magnitude on our own.  It wasn't an option.  Period.  In fact, I don't know if we'd have been permitted to leave the house with a project like the one above. Not because it's horrible, but because it wasn't the best that we could do with a little help. 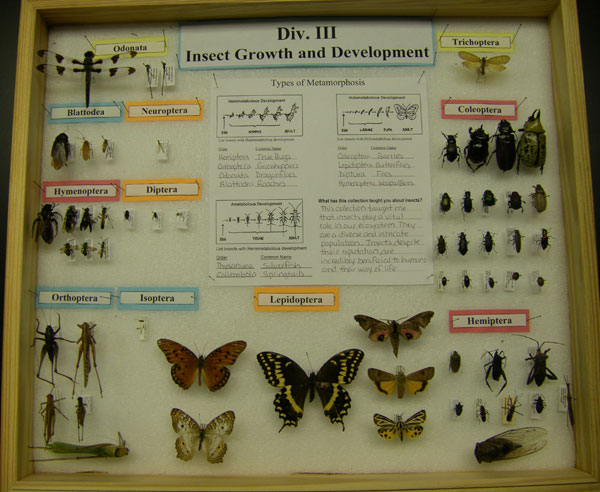 And I'm sure that people might disagree with this parenting-project-philosophy.  In recent years America has decided that kids should be able to do projects all on their own and it's a badge of honor for your kid to be able to say, "I made it all on my own," even if the end result is crap. Yep, I said it, crap.  A lot of American kids turn in crap (and there are varying degrees of it) and call them projects or papers or presentations, "that I did all by myself." As if doing something by yourself is the hallmark of quality.  The other spell that America seems to be under is the one that says if a parent helps a kid with a project, guides them to do their best, shows them how to enhance an idea, shows them what they are actually capable of that their kid isn't doing the project on their own and the validity of the finished product is cheapened.  That's a lie.

As an educator for the last thirteen years I'd say that most teachers, if they're being honest, hope that parents are helping, really helping, kids with their projects.  Because the thing is, we know that when parents sit down and help their kids, show them how to do something better, give them ideas, spur on creativity, model how to do something, send them back to the drawing board if need be........kids are inspired.  They get excited about what they can do and what the end result looks like.  And when they get excited that they produced a top-notch assignment, they want to do even better the next time around.  And that's growth.  Authentic and viable growth.

School-age kids need help in almost everything that they do--it's okay to offer it....it's imperative. It's our job and it's their time to learn.  Even when they fight help; they need it.  My three year old daughter "knows" how to get her snow clothes on to play outside--she makes it very clear that she wants to do it on her own.  So I let her.  And then I step in and show her that her boots aren't secured correctly, her thumbs aren't in the mittens the right way, her coat is buttoned crooked, and that without me helping her she'll be freezing and miserable when she goes outside.  And she still gets mad at me.  And I don't care.

Because bottom line I want her to have a good experience when she goes out to play in the snow.  I want her to see me buttoning her coat the right way over and over so she'll learn to do it on her own one day.  If I never showed her and just cheered praise about something being done wrong or mediocre because I wanted her to feel good about the fact that she did it "all on her own" she'd get frostbite and sick and wonder why I said she'd done a great job and then went outside and froze and got snow up her leg.  And nine times out of ten after I've helped her she'll say, "Oh...that feels a lot better.  Thank-you." I haven't robbed her of her independence, I've helped it.....because I've modeled the right way to do something.  I've given her legitimate confidence to do something better the next time.

I've noticed lately that I've had to employ some of the 'you will do your best work in this family' attitude  with Georgia.  She'll sit and draw for hours at the little table we have in the kitchen.  And she can do amazing things.  The most adorable little people and animals that she'll pore over and perfect.  I go crazy over them. 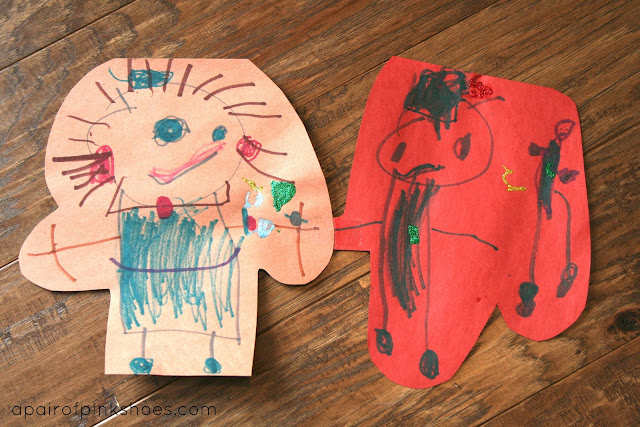 She brought these cuties to me and asked me to help her connect their hands.  I did.  And then I told her it'd be cute if she added some glitter glue and I showed her how to use the new tubes of it that we had.  I also mentioned that they didn't have shoes on and she should add shoes to their legs.  She was happy for the suggestions.  Suggestions that built up her confidence in what she could do and what she could get her projects to look like....not suggestions that made her feel like I was taking over and dictating what the final product should be.

A few days ago she told me that she wanted to draw a special picture for someone she knew--someone that was an adult.  She told me she wanted it to be amazing. "Great!," I said.  "What are you going to draw?"  She told me, "a lady wearing a pink dress."  She got to work. 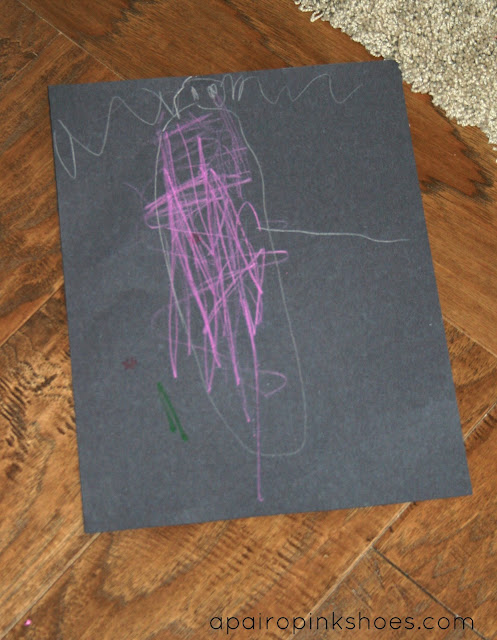 And this is what she drew.  It took her two minutes.  But she did it "all on her own."  She asked me if I liked it and thought it was beautiful.  "Hmmm, " I said.  "It doesn't seem like you took that much time on it and I've seen you do way better when you let me help you or when you just take your time and do it like..........," and I listed some suggestions.  She replied, "Well, it's okay, we can still send it this way."

"No," I said, "we can't."  "We're not sending this to someone we love as a special Valentine's Day drawing because I know it's not your best work." She looked at me for a few minutes and sat back down.  We've had the "best work" conversation before about a litany of things and she knows I'm not messing around when it comes to best work.

Now, lest you think I'm five minutes away from becoming Tiger Mom--I don't care if she draws scribbles and loops like this all day long......but when the purpose of the drawing is to send it to someone we love for a Valentine's Day card there are going to be standards....like there are for any project. And when I've seen what she's capable of on other days--I know what her best really is. 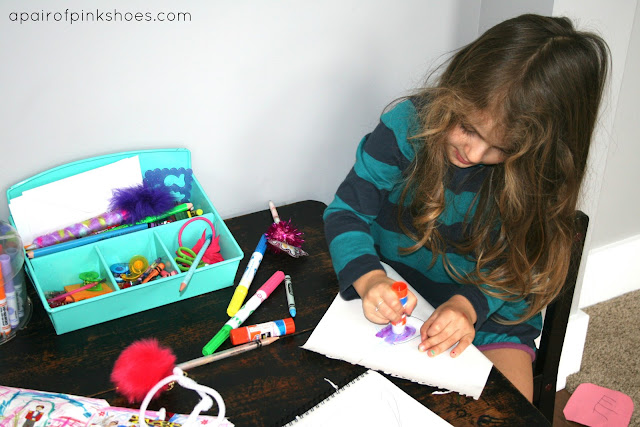 So she started again.  And I sat next to her and gave her some simple suggestions and reminded her of things she'd drawn in the past and helped her with a few shapes that she was stuck on.  I was not taking over her project. I was helping her see what she was capable of doing if she put her mind to it, focused, and worked hard.  At one point she told me she didn't want my help.  "You're kind of stuck with it," I said.  In the end she made an adorable little Cinderella drawing that was absolutely her best work.  She learned how to mix glitter glue and water color paint and thought that was pretty great.

She was proud and said, "I did this all on my own," proving my point that helping kids doesn't equal taking away their ability to accomplish something independently.  It only does if we perpetuate the myth that working with someone, whether that be a parent, a friend, a teacher, a co-worker, a spouse, or a child is not as valuable, is in fact less valuable, than working as a team.

So here's the thing.  Do projects with your kids.  Pretty much all of them.  Even when your kids insist that you are to have no part in them. School works best when it's done in tandem with home.  You'll build your kids confidence because they'll see what they're truly capable of and teachers (like me) will love it! And another thing--if your kids want to wage a war over a project and turn in crap, consider not letting them and facing a zero on a project that might very well damage their grade beyond repair.  Because the truth is, as a teacher, I wouldn't let garbage get turned in.  I'd tell kids, "I'm not grading that.  I know it's not your best......at all.  I provided you with clear guidelines, you could have asked for help, planned ahead, or taken more pride........and I won't accept that.....I've seen what your best is, and that's not it."  I suppose I'd rather have them learn that lesson as a third grader or an eighth grader versus when they're a student teacher, or an intern at their dream job, or during the first week in a new position right out of college.

Our kids aren't learning that lesson like we did and whoa.....does it show.  We're all up in arms and playing the "wounded ego" card telling stories of how our moms 'took over our bug collections in fourth grade and made it more about them than us.'  And we need to stop and get real.  It wasn't about them, it was about showing us how great we could be....if we accepted help and admitted that as a fourth grader we might not know everything there is to know about making a bug collection look amazing.  It was about laying a ground-work of good ideas for future projects.  And it worked.

It worked a lot better than the fluffy, false praise of, "And you did it all by yourself!"

Let's change our language to, "And you worked so hard, and took suggestions, and asked for help, and applied yourself, and look what you accomplished."