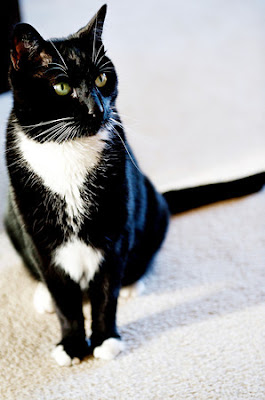 that's who this guy is named after.  However, he is neither swarthy nor quick tongued (he just meows a lot) so it's hard to drum up as much affinity for him as one might have for Johnny Depp's alter ego.

Here's the thing (and I'll just say right now I can't believe I'm posting about a cat)..............I used to LOVE this guy.  I distinctly remember a time right after Georgia was born, in my sleep deprived added to my already "I generally border on crazy" state that I stood crying in our bedroom door with Sparrow in my arms telling Chris that I didn't think Sparrow felt as loved anymore and  this wave of guilt came crashing down on me.

Chris had some encouraging words for me.  You can interpret encouraging however you'd like.

Sparrow started hissing and batting at every new person that came into our house.  A result of feeling territorial about the baby?  Not on your life--he was just getting cranky.

Sparrow started wanting to be fed every ten minutes and crying until food appeared in his dish.  Often for hours at a time.  He eats five times a day, a special prescription food, and sometimes while he's eating he actually starts whining.  Why?  Who the heck knows?

He started puking, on average, once a day because he ate too fast.  And he has no ability to self-monitor the eating if we were to leave out a lot of food in the hopes that he'd only eat enough to be satisfied and know it was there if he wanted to come back.  Nope--he'll just eat 'till it's gone--even if the bowl of food is as big as my kitchen sink.

He started running in between our legs while we're walking, bringing me to my knees at least once a week.

And did I mention the hissing and batting.  I just wanted to make sure you knew how adorable he was.

Why do I share this very enticing slice of my life?

When do you decide you've put up with enough from a pet?  How do you justify it in your mind?  How do you carefully orchestrate his departure so that the two year old who thinks he loves her doesn't corner me with questions that I can't answer tactfully?  How? How? How?

But it's hard. It's really hard to come to this decision.  And maybe in the end we don't really come to a decision at all; we just continue tolerating and making apologies for our really friendly cat.  Who knows?  Pets are hard, at least for me.

One of my friends told me I should just hire someone to take him in so we wouldn't actually have to "do" it and some other friends I know actually did that for some of their friends. 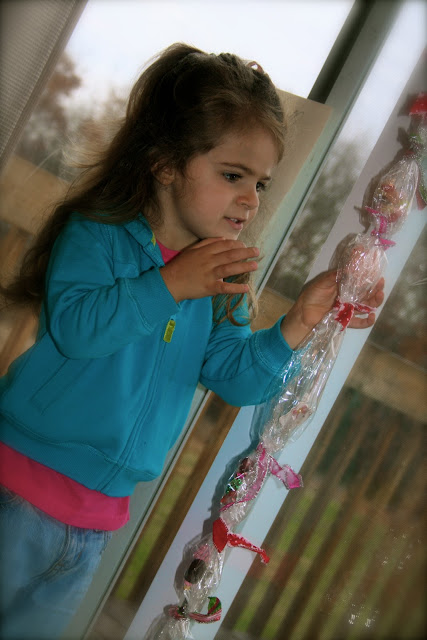 We are almost to the Pig in the advent chain.  It's been a constant topic of conversation and tomorrow is it! (This picture was taken a few days ago).  If anything, this advent chain teaches patience to a two year old in a fierce way.  More tears have been shed over having to wait for this pig key-chain than I ever would have imagined!  I hope it can live up to it's reputation.

Also--last night we had dinner with these amazing girls and their husbands........... 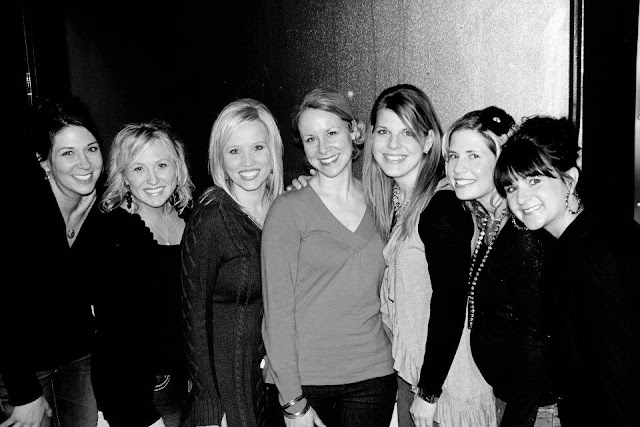 A lot of life has been endured in this group and it's always great to come together and catch up.  I feel like a lucky girl to have them on my home-team! (Thanks Jaren for the great picture!)
Posted by maggie at 10:03 AM